Ian Johnson, China journalist for the Wall Street Journal, and author of Wild Grass: Three Stories of Change in Modern China. In 2001, Johnson won the Pulitzer Prize for his coverage of China. 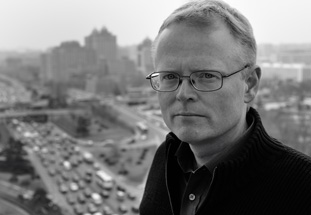 Below is an interview of Ian back in 2008 – which brings us insights on how Ian started his relationship withChina:

1) What was the most intriguing, amusing, inspiring, or eye-opening story that you have covered in China?

I think the favorite story I covered was about farmers in northern Shaanxi who were filing class-action lawsuits against the authorities for overtaxing them. I had been aware of Chinese class-action lawsuits, at least from the 1990s when I read about them in China Quarterly. But I never thought that they would be used in such a poor area and, to some degree, to such effect. This is a really poor part of the country and yet people were aware of their rights and had banded together to try to protect them. In one particular case I wrote about, the farmers succeeded in reversing illegal fees. In another they didn’t, but overall I think that such lawsuits had an effect. The government has since repealed most of these fees and the situation has improved a lot.

I remember one thing in particular—the farmers didn’t realize what their tax rate was supposed to be until they saw it on the television news. This showed the transformative power of electricity and mass communications, which essentially bypassed corrupt local officials. And of course the local people were extremely hospitable. I had never thought that a cave could be so comfortable.

2) If you could convince academics to do more work related to a topic in Chinese history or contemporary China, what might that be?

It’s hard to think of a topic that academics haven’t sliced and diced, but what I think would be an excellent service would be more accessible macro-histories of certain topics that our Bildungsbürgertum [educated middle-class] could read to learn about China.

This is an old gripe and one that many academics share. What bothers me is that it’s often hard to recommend one book in a certain field because most academic books are too specialized. Journalist books, by contrast, are often too perishable or too banal. So I think there’s a lack of books that serious, educated non-specialists can pick up and read on various topics. (To clarify, I don’t mean a book on just China, but even on something more specific, such as Chinese economic reforms or Chinese politics.)

I’ve read a lot of great books recently by academics but few that I could recommend, say, to my father. That’s because they are loaded with jargon and even coin words or dredge words out of the depths of the OED to describe what essentially are very ordinary phenomena. This is a pity because all that great work ends up hitting a tiny fraction of the population. Again, I don’t see an easy answer to this given the reward structures in academia, but it’s something worth considering.

3) Are there certain questions that you get all the time as a journalist covering China that just irritate you? In other words, are you commonly confronted with certain stereotypes or misconceptions about China which endure despite your multiple attempts to dismantle them?

Well, besides whether Chinese really eat dogs or whatever, I’m bothered by questions that reflect an overall lack of understanding. As a journalist, the most sobering experience I have is when friends come to China and are astounded at how China doesn’t fit their expectations. I think this is due to our failure in the media to convey China accurately.

One example is migration. If you believe most journalistic coverage, migration is a disaster, with exploited peasant girls getting sucked into Dickensian factories, the only escape from which is suicide or prostitution. This happens, but the bigger and more accurate story is one of urbanization, wealth creation, and empowerment. Young people with no future on the farm are going to factory towns to work and save money, which they send home or use on themselves. It’s not all Horatio Alger, but the dominant storyline of victimization is plain wrong.

The problem is that readers lack the ability to contextualize. If an American reads about an exploited worker in the U.S., he or she knows that this is atypical; most factory workers don’t work in brutal sweatshops. If they read about it in a foreign country, they often make a reverse assumption: that it is representative. This is a logical assumption because we want to know about what’s the big picture in foreign countries; we don’t want to waste our time reading about a bunch of exceptions. Who can figure out what’s exceptional if we don’t know what’s typical?

Journalists, meanwhile, are conditioned to report on the exceptional. You put the two together and readers are often misinformed. They think China is a polluted gulag on the verge of collapse. But when readers come here, they sense the dynamism and wonder how they got it so wrong.

4) What is the most exciting or rewarding aspect of working as a foreign correspondent?

Being able to barge into people’s lives and nose around.

5) What first drew you to China, and how has your job changed your life in ways that you never imagined when you first began?

I got interested in China for two reasons: one, my father worked for Swire (a big Hong Kong conglomerate that owns, among other things, Cathay Pacific airlines) and had made some trips to the company headquarters. I think that piqued my interest. Maybe because of that I signed up for Chinese as a lark—I certainly never intended to study it. I had attended the University of Florida because it was an affordable, local state school and had a good journalism program. The university had a language requirement and I didn’t want to learn another western language (I grew up in Montreal, so had French as a second language). A teacher posted a note somewhere saying he was looking for students to fill out his beginning Chinese section and so I thought this would be fun for a year. The teacher (Chauncey Chu) was an incredibly gifted and enthusiastic teacher. I fell in love with the language and changed my major after the second semester, and later continued my studies in Taiwan and Germany. So I have an academic to thank (and a linguist at that) for my engagement with China.

The original article link.
If you feel interested in engaging Ian for a speaking arrangement please contact[email protected] for more information.