Andy Xie, our renowned Chinese economist, wrote an article in CaixinOnline on “where the bottoming of gold, a misguided faith in Abenomics and an unrealistic hope for a new investment boom in China have led us”.

Andy thinks that market is volatile due to speculations. 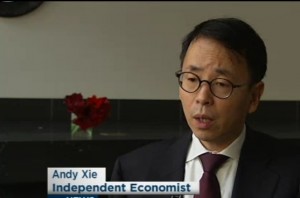 After the Flash Crash

The recent gyrations in precious metals, commodities, and both the dollar and yen stem from correlated deployment of vast liquidity resulting from quantitative easing around the world. Some of the correlations are just due to the same people stir-frying the same stuff, not economic reasons.

[…] My case was based on Japan’s recession and sustained trade deficit. I still believe that yen is in a long-term bear market. The yen’s first 10 percent depreciation was due to these fundamental reasons. […] Now I believe that gold has bottomed. Speculative money in gold has left. Inflation and slowing growth are favorable for gold. Stock markets are likely to struggle for the next few months. The dollar’s rise is pausing for now. It seems that the headwinds for gold are removed and the tailwinds are getting stronger. Gold should perform quite well for remainder of the year. Even a new high is possible. […] Since September, the trending view on China was that the new government would create another investment boom like in 2009. It became a consensus in early 2013. Driven by this view, the iron ore price increased from below US$ 90 per ton last summer to a recent high of above US$ 150.

That view was mainly imagination, not grounded on facts. China’s local governments have extremely high indebtedness. So do state-owned enterprises (SOEs) […] Without painful reforms like cutting taxes, reigning in government spending and SOE investment, China’s economy is unlikely to come back.

[…] I have been bullish on agro commodities for many years. Despite the slowdown in the global economy I stick to this view. While the emerging economies have slowed down, their growing income will go disproportionately into food consumption. This is what occurs when income grows from a low base. Agriculture is where the big population in emerging economies makes a big difference.

One piece of supporting evidence is China’s rapid growth in food imports. Lax environmental protection has severely polluted China’s farmland. To deal with the food safety crisis, China will have to import a lot more food products. It will have a humongous impact on global prices.