Former Australia Ambassador to China, Geoff Raby now provides consultancy to companies on doing business in China, and Chinese company on their going-out strategy.  Here is his recent interview at China Daily: 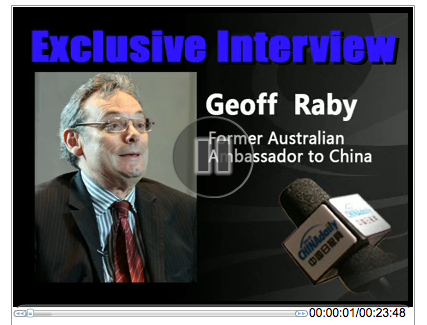 Dr Geoff Raby  芮捷锐博士 is Chairman and CEO of Geoff Raby & Associates, a Beijing-based business advisory firm. In addition to his roles at Geoff Raby & Associates, Dr Raby is Executive Director of Riverstone Advisory, as well as an Independent non-Executive Director on the boards of Fortescue Mining Group, OceanaGold, and SmartTrans. He is also Co-Chair of Corrs Chambers Westgarth’s China Business Group, Senior Advisor to Kreab Gavin Anderson and the President of QIC’s China Business.

Dr Raby has recently been appointed as a Vice Chancellor’s Professorial Fellow at Monash University, a member of the Advance Global Advisory Board, and to the International Education Advisory Council by the Minister of Education, Employment and Workplace Relations.

Contact us today to engage China expert Dr Geoff Raby for your next event!