Eddie Wang, former president of MinSang Banking Corporation, shared his life experience in a reason seminar. “Life has many possibilities, even when you are 60.” You can read about it here (in Chinese)… 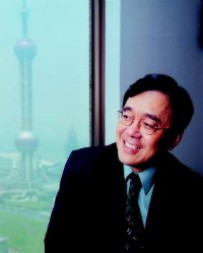 Mr Eddie Wang 王浵世 is a veteran banker working in HSBC for more than 30 years and the former president of China Minsheng Bank.  He is the first Hong Kong-Chinese banker who took the top position in a domestic Chinese bank.

Mr Wang was raised in Hong Kong and once worked as a private banker in Beverly Hills.  He played many vital leadership roles, including senior management positions in retail, corporate and private banking divisions and also developing Asian business in the United States.  He was China Chief Executive of HSBC Holdings Plc from 1994 to 2002.

Invited by the Central Government, Mr Wang became the President at Minsheng Bank 民生銀行 in 2006 as the Beijing-based lender hoped to tap his expertise to boost its retail operations.  During his term, Mr Wang helped the bank to set up its private banking arm, aimed at attracting business from China’s growing ranks of millionaires.

Mr Wang has authored two books, “The Art of Management in Beijing and Shanghai”, and ” Hong Kong, Shanghai, HSBC Stories “, both in Chinese, which have always been best-sellers in Hong Kong.

Contact us at +852 3489 9246 or [email protected] to engage Mr Eddie Wang 王浵世 to inspire your team and clients on concrete knowledge of doing business in China.