Frank-Jurgen Richter wrote an article in Business Times about the whistleblower Edward Snowden. Full article below (also in pdf). 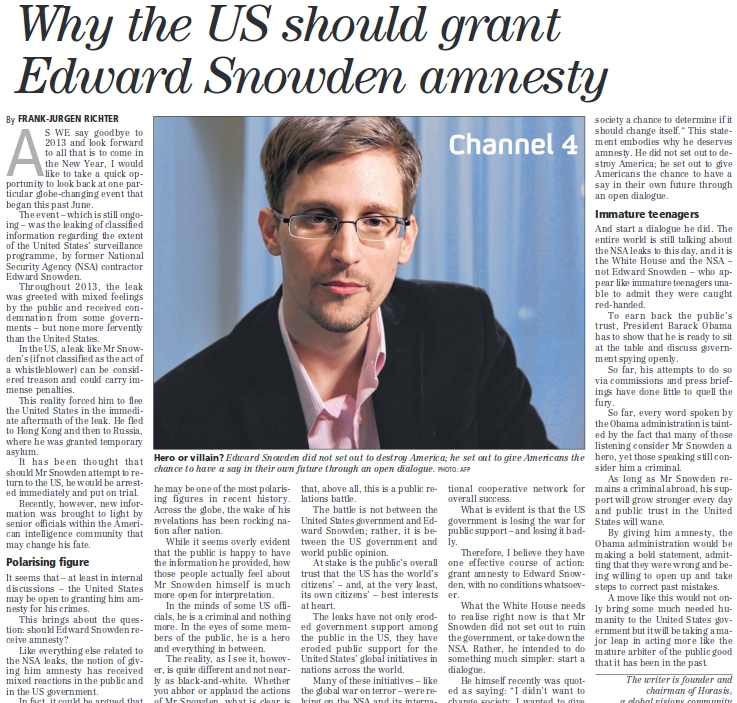 Why the US should grant Edward Snowden amnesty

As we say goodbye to 2013 and look forward to all that is to come in the New Year, I would like to take a quick opportunity to look back at one particular globe-changing event that began this past June.
The event – which is still ongoing – was the leaking of classified information regarding the extent of the United States’ surveillance programme, by former National Security Agency (NSA) contractor Edward Snowden.
Throughout 2013, the leak was greeted with mixed feelings by the public and received condemnation from some governments – but none more fervently than the United States.
In the US, a leak like Mr Snowden’s (if not classified as the act of a whistleblower) can be considered treason and could carry immense penalties.
This reality forced him to flee the United States in the immediate aftermath of the leak. He fled to Hong Kong and then to Russia, where he was granted temporary asylum.
It has been thought that should Mr Snowden attempt to return to the US, he would be arrested immediately and put on trial.
Recently, however, new information was brought to light by senior officials within the American intelligence community that may change his fate.

Polarising figure
It seems that – at least in internal discussions – the United States may be open to granting him amnesty for his crimes.
This brings about the question: should Edward Snowden receive amnesty?
Like everything else related to the NSA leaks, the notion of giving him amnesty has received mixed reactions in the public and in the US government.
In fact, it could be argued that he may be one of the most polarising figures in recent history. Across the globe, the wake of his revelations has been rocking nation after nation.
While it seems overly evident that the public is happy to have the information he provided, how those people actually feel about Mr Snowden himself is much more open for interpretation.
In the minds of some US officials, he is a criminal and nothing more. In the eyes of some members of the public, he is a hero and everything in between.
The reality, as I see it, however, is quite different and not nearly as black-and-white. Whether you abhor or applaud the actions of Mr Snowden, what is clear is that, above all, this is a public relations battle.
The battle is not between the United States government and Edward Snowden; rather, it is between the US government and world public opinion.
At stake is the public’s overall trust that the US has the world’s citizens’ – and, at the very least, its own citizens’ – best interests at heart.
The leaks have not only eroded government support among the public in the US, they have eroded public support for the United States’ global initiatives in nations across the world.
Many of these initiatives – like the global war on terror – were relying on the NSA and its international cooperative network for overall success.
What is evident is that the US government is losing the war for public support – and losing it badly.
Therefore, I believe they have one effective course of action: grant amnesty to Edward Snowden, with no conditions whatsoever.
What the White House needs to realise right now is that Mr Snowden did not set out to ruin the government, or take down the NSA. Rather, he intended to do something much simpler: start a dialogue.
He himself recently was quoted as saying: “I didn’t want to change society. I wanted to give society a chance to determine if it should change itself.” This statement embodies why he deserves amnesty. He did not set out to destroy America; he set out to give Americans the chance to have a say in their own future through an open dialogue.

Immature teenagers
And start a dialogue he did. The entire world is still talking about the NSA leaks to this day, and it is the White House and the NSA – not Edward Snowden – who appear like immature teenagers unable to admit they were caught red-handed.
To earn back the public’s trust, President Barack Obama has to show that he is ready to sit at the table and discuss government spying openly.
So far, his attempts to do so via commissions and press briefings have done little to quell the fury.
So far, every word spoken by the Obama administration is tainted by the fact that many of those listening consider Mr Snowden a hero, yet those speaking still consider him a criminal.
As long as Mr Snowden remains a criminal abroad, his support will grow stronger every day and public trust in the United States will wane.
By giving him amnesty, the Obama administration would be making a bold statement, admitting that they were wrong and being willing to open up and take steps to correct past mistakes.
A move like this would not only bring some much needed humanity to the United States government but it will be taking a major leap in acting more like the mature arbiter of the public good that it has been in the past.

The writer is founder and chairman of Horasis, a global visions community