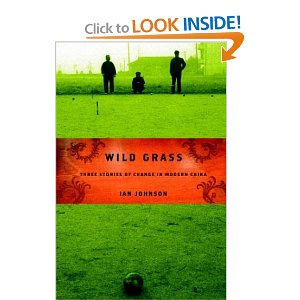 Ian Johnson, a Pulitzer Prize winner for his reporting on China for the Wall Street Journal, has found the small pockets of resistance that dot the vast landscape of Chinese society and may become the initial fissures that will someday bring down the seemingly indestructible façade of the Communist Party. In Wild Grass, he recounts the stories of three ordinary people who find themselves fighting oppression and government corruption, risking imprisonment and even death. A young architecture student, a bereaved daughter, and a peasant legal clerk are the unlikely heroes of these stories, private citizens cast by unexpected circumstances into surprising roles.

As he accompanies them on their journeys through the impenetrable bureaucratic maze of Communist China, vividly depicting village meetings and Beijing police stations, spontaneous protests and secret networks, Johnson reveals the contradiction at the heart of modern China. It is a nation intent on pursuing economic reform, creating an open-market economy, raising living standards, improving education, and giving its citizens more time to travel, to think, and to determine their own lives. But at the same time, it refuses to alter the monopoly of power exercised by the Communist Party, and it willfully—often brutally—suppresses the emerging civil society that exists outside the party. From the humble lives that Johnson shares with us may come the revolution that will change China once and for all.

If you feel interested in engaging Ian for a speaking arrangement please contact[email protected] for more information.