Jack Perkowski, renowned China expert, will be speaking at China Investment Summit in London on 25-28 Oct.

The Summit will bring together European and institutional investors, sovereign wealth funds, banks, fund managers, regulators and others seeking to access investment opportunities in China. Jack will be speaking at the Summit, along with Jing Ulrich, head of China research at JP Morgan, James Kynge, editor of The Financial Times’s China Confidential and author of bestseller China Shakes the World, Marc Faber, author of The Gloom Boom & Doom Report, and many, many other notable speakers. 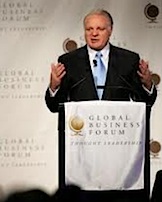 In advance of the Summit, below are some Q&As from Jack for the event official website.

What will be the top three drivers in China’s economy be in 2012?

As always, the Chinese government will head the list of economic drivers as it continues to make large investments in key sectors such as power generation, transportation, health care and renewable energy. Moreover, China operates under a five-year planning cycle, and 2012 will be the second year of the country’s 12th Five-Year Plan, covering the years 2011 to 2015. This is important, because the second, third and fourth years in China’s five-year plans typically have the highest spending levels. Because a new five-year plan in China is not approved until the National People’s Congress, the country’s top legislature, meets in March, the first year (2011 in this case) only has a partial-year effect. By year five, the country’s investment programs are winding down and the government bureaus are beginning work on the next plan, leaving the middle years as the most active, from an investment point of view.

Foreign direct investment (FDI) will also continue to drive China’s economy. According to a United Nations report, China was the second-largest recipient of FDI in 2009, attracting $95 billion, behind the U.S. with $130 billion. FDI rose to a record $105.7 billion in 2010, and is up another 18.6 percent through the first seven months of this year. As the world’s fastest-growing large economy, corporations from all over the world will continue to invest ever-increasing amounts in the country in order to secure their share of the China market.

Finally, consumer spending continues to rise in China and is becoming an important economic driver for the country as a whole.

China is now the largest automotive market in the world by far, and the long lines at the Apple store in Beijing, the crowded restaurants, and the robust sales of fashion items all tell the same story — Chinese consumers are on a spending spree.

What are the three asset classes experiencing the most growth in China today?

Despite the negative press it has received lately, real estate will also continue to be one of the fastest growing asset classes. While the property markets — and prices – have been red hot in Beijing, Shanghai and other Tier 1 cities, a growing economy will require more commercial and industrial space, and China’s large population will need more housing. This is particularly true in China’s Tier 2, 3 and 4 cities where many experts believe the greatest growth in China will occur in the next 10 years. China’s tightening measures are creating unprecedented opportunities in real estate for foreign investors. According to CBRE Research China, about 45 percent of real estate investment deals in China in the first half of 2011 were made by overseas institutional investors, much of that in China’s smaller cities.

Finally, demand for common stocks continues to build. In 2010, a total of 321 companies went public on Shenzhen’s SME and ChiNext (GEM) boards, raising a total of nearly RMB 300 billion ($46 billion) in funds. The number of companies that listed was more than three times the 90 companies that listed in 2009, and the capital raised was almost five times the RMB 62.8 billion ($9.7 billion) that was raised in the previous year. An additional 150 companies have already listed in 2011, and more will be sure to join the ranks of publicly listed companies in 2012.

What are the three biggest challenges that foreign investors will face in 2012 when entering the Chinese market?

The biggest challenge that foreign investors will face when entering the China market in 2012 is the intense competition that exists for good deals. While the Chinese economy is growing, and more and more interesting companies are being created every year, the demand for good deals is growing even faster. Global investors would like to invest more in China, and they are now finding themselves in competition with an ever-increasing number of local investors that know the landscape and have substantial funds to invest.

As evidenced by the devastation of the market values of U.S.-listed Chinese companies that has occurred, overcoming the information and credibility gaps that exist between China and the rest of the world will continue to be a major challenge for foreign investors. Without a major local presence — or access to a trusted and reliable organization that has one — it is very difficult for foreign investors to really know what is going on with respect to their investments in China.

While much progress has been made, corporate governance will also continue to be a major challenge. Many Chinese management teams that are taking their companies public in China or in overseas capital markets do not understand what is required to run a publicly listed company. More often not, the results are frustrated management teams and disappointed investors.

Contact us at China Speakers Agency at [email protected] or +852 3489 9246 if you would like to engage Jack for your next event, or viist us for more top-notch China experts from us.