Zhang LiJia 張麗佳, motivational speaker, independent writer and journalist in Beijing, writes on her blog about Beijing, its Smog, and what can’t be buried. 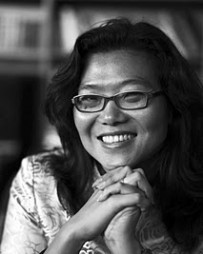 It was one of those days – the capital was blanked under heavy smog. But life went on. Yesterday I explored southern Beijing’s Liulichang area with my Polish friend Kasia, who is a sinologist and who knows a great deal about Beijing and its rich history.

I had met Kasia early last November when Paul French, the author of Midnight in Peking, led a tour in Southern Beijing where the murder he so vividly described in the book took place. During the tour, while Paul eloquently explained the history and pointed out the traces of the past, Kaisia filled me in with other interesting stories such as the elephant stables that kept the elephants presented by the Indians to the Chinese emperor and the place where Dowager Cixi secretly treated her woman’s problem which allowed her to bear a son for emperor Xianfeng. A month later, Kasia designed a talking tour for the Foreign Correspondents’ Club where the participants were sent to look for the old residents of some famous Peking Opera singers or the sites of some old newspapers. I dragged my two daughters along. Kirsty complained for being cold; May enjoyed it and I loved it. With a whetted appetite, I proposed to Kasia that I would treat her lunch at Capital M, my favorite restaurant in Beijing, and she would give me a guided tour. She replied that she would be happy to explore the hutong’s together.

So yesterday we met for a lunch at Capital M, right by the fire, with the view of the magnificent Jianmen Gate, and then set out to brave the chill and smog.
The highlight of our tour was Dong Fang Hotel (Oriental Hotel),China’s first luxury hotel, 20 minutes walk southwest of Capital M in Jianmen. Constructed in 1918, the hotel was a product of the so-called The Culture Movement that swept China in 1910 and 20’s, in the early Republic period, shortly after the ending of the imperial danysties. Frustrated by China’s backwardness and disillusioned with traditional Chinese culture, many Chinese intellectuals looked up to the west and called for a new culture that was based on western culture and value, in peculiarly democracy and science. They wanted to modernize China. Beijing and Shanghai were the two centers. In the mid-1910’s, the concept of urban planning was introduce for the first time and the New Downtown in Xiangchang emerged, featured two-storey brick houses similar to style with those in Shanghai’s Xintiandi. Dong Fang Hotel was in the center of Xiangchang square. Many lead players of the New Culture Movement, such as Chen Duxiu, Cai Yuanpei, Li Dazhao, and Lu Xun took residence or frequented here.

I was thrilled to find such a historical hotel with characters – there are just so few of them in China, unlike India that boasts tons of boutique hotels that are turned from old places and such. Kasia had read about Dong Fang but hadn’t explored it. So we went inside. The hotel got two parts, the old building and the new one,constructed in 2006 in the old style, as showcased by the stair case in the lobby. A bell boy showed us the old building, now called ‘residence of celebrities’. Indeed, a plaque is placed in front of every room, explaining who stayed here, when and for what. Each one of them had a fascinating story to tell and left his(her – I only noticed one woman, writer Bing Xin) mark in history. Among those less famous people associated with the hotel was a man by the name Shao Piaoping, the editor-in-chief of newspaper Jing. In April 1926, he was arrested for writing an article critical of the authority and was promptly executed in public. Maybe the world should be too shocked by the way today’s authority treating journalists who dare to push the envelope. During the last walk tour, we had visited the site of Jing office.

At Dong Fang, we wanted to visit the room of Lu Xun – in fact, he was today’s focus as Kasia intended to plan another route to follow the footstep of the literary giant. Lu Xun had taken refuge here with his family in 1926 after hearing that a war between different war lords was to break out. The war was somehow avoided. His family went back home and he stayed on to write. His short stories and essays critical of Confucius value, written in style of the so-called “vernacular Chinese’ (bai hua) were causing sensations among the educated middle class. Since his room was occupied, we saw the suite of Cai Yuanpei, the renowned scholar, educator and the president of Peking University. The room is spacious with high ceiling, furnished with antique furniture (most likely recently produced), an old styled phone and old styled calendar featuring cheongsam clad film stars. In the sitting room, there’s an opium bed with tea set. All of these lured me to stay. And I will, soon. I love to stay at hotels laden with history and interesting tales.

After a coffee break at the characterful bar, we set out to explore the hutongs. In the olden days, Southern Beijing used to be the center for business and entertainment. Not surprisingly, the red light district as well. In Shanxi Lane, we checked out old residences of two famous courtesans Xiao Fengxian and Sai Jinghua. Xiao was the lover of influential general Cai E. With the help and encouragement from Xiao, the general challenged his boss Yuan Shikai’s ambition to become an emperor. Xiao therefore became inspirational and legendary. It is now hard to imagine the glory she once enjoyed from the appearance of the house. Kasia at first wasn’t sure that it was the right address. Then she saw the front of the house which had no windows, the feature of prostitutes’ houses at the time. The house of another prostitute Sai Jinghua has been turned into a backpacker’s hotel. It is a delightful wooden two-storeys structure centered around a courtyard, colourfully painted. If I were a backpacker, I would choose to stay here so that I could dream up all those exotic and erotic tales.

Actually Kasia’s aim was to check out a few book stores and tea houses in streets just off Liulichang where Lu Xun frequented. Liulichang is a market place famous for antique books, paintings, calligraphy works, rubbing and such. Most of the Lu Xun’s spots no longer exist save for one book store called Qinyuan Pavillion. During the writer’s stay in Beijing, he used to come here, looking and buying books downstairs and chatting with the owner and then drank tea upstairs, reading his new purchases. The elegant grey brick structure stood in one corner, its red front door closed. It is not in any apparent use. We were delighted to see it: I guess it gave our Hutong wandering a sense of purpose and we felt we discovered something.

That’s one of the many joys of living in Beijing – you can always discover something new and delicious. Because of this, we can put up with unpleasant things such as the smog.