Here is Lijia Zhang‘s speech: Chinese Women between Past and Future, which she presented at the Italian Embassy in China. Three touching stories of Chinese women… 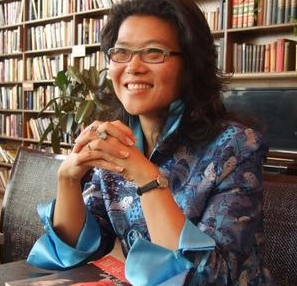 My grandmother was a prostitute-turned concubine, my mother a frustrated factory worker and myself a rocket factory girl turned-international writer. Today I am going to tell you the stories of these three women in my family, to illustrate the changing role of women in Chinese society. I am always hugely interested in women’s issues and have written many stories on the subject because I believe women’s position and the attitude towards them, tell you a lot about a society.

As in many parts of the world, Chinese women have not reached the same status as men, even though Chairman Mao famously declared that “Chinese women can hold up half of the sky.” I think the statement is as elusive as the sky itself. But I have to point out that the Chinese Communist Party has done a great deal for women, probably more than what has been acknowledged. I believe all three women in my family have, to a greater or lesser degree, benefited from the revolution led by Mao.

The story of my Grandma – a working girl turned concubine

My grandma was called Yang Huizhen. But ever since she became my grandpa’s woman – well, she was his concubine before becoming his wife – she was known as Huang-Yang Shi – meaning the woman who was married to a man surnamed Huang and nei Yang. This is an example of how women had no identity of their own in the olden days.

Grandma was born in 1915 in a town called Zhenjiang in the eastern part of China, not far from Nanjing. She became an orphan at a young age – she was six, I think, when her parents died in a famine. She was at first adopted by her auntie’s family who treated her like a slave. Then they sold her into a brothel. In those days, women were a common commodity.

I do not know the details of this part of her life. In 1998, in front of my Grandma’s deathbed, my mother revealed this secret to me that grandma was once a working girl. I was shocked. When I calmed down, my respect and love for my grandma only deepened. This was a woman who endured incredible sufferings, the famine, the Japanese invasion, the hardship of a prostitute, yet was never embittered by those experiences; she was the most loving and giving person I’ve ever known.

She met my grandfather, a small time grain dealer, on the job. He took her to Nanjing, on the banks of Yangtze River. There, they set up a home. Grandpa’s first wife and her children remained in a village outside of the city. In 1949, after the Chinese Communists victory, men were ordered to keep one wife. Grandpa decided to keep my grandma, his concubine as his wife.

Like many women of her generation, grandma had bound feet. Fancifully described as ‘three inches of golden lilies”, the practice of foot-binding caused great pain and misery. A girl’s feet were bounded by many layers of cloths to prevent growth. As she grew up, she couldn’t even walk properly with her deformed feet. This was the Chinese men’s way to make women dependent on them.

Grandma was illiterate. She learnt to write a few basic characters from the anti-illiteracy classes organized by the government after the liberation. She was encouraged to use her own name instead of Huang-Yang Shi.

My mother Huang Yunfang was born in 1937. She was 12 years old when the Chinese Communists took over and established the People’s Republic of China. Like many progressive young people, she was happy about the dramatic social transformation because the new regime brought along new hope to millions of Chinese. Also the new government soon introduced a series of policies favorable to women, abolishing feudal tradition of foot-binding, concubine-taking, and arranged marriages as well as granting women the equal rights to education and employment.

After finishing middle school, my mother was assigned a job at a state-owned military factory. Jobs were assigned by the government in those days. She considered herself very lucky to have obtained an ‘iron rice bowl’. It referred to the job with a state-owned enterprise as it meant a job for life and cradle to grave social warfare. The factory was also prestigious. Among other things, it produced inter-continental missiles that were capable of reaching North America.

In the early days of her factory life, my mother was happy enough. In the late 50s before China was hit by a series of political campaigns, the country was filled with aspiration and the young people were very enthusiastic in making a contribution to build socialist china.

My mother got married at the age of 22. That was not a happy story. My father was tall, dark and handsome but selfish and ill-tempted. Also for most of his working life, he lived in another city. Thanks to the ‘hukou’ – family registry system, he couldn’t just move back to Nanjing, his own hometown. Every year, he spent about two weeks at home with us. My mother should have divorced him but she held the traditional belief: “marry a dog; stay with the dog and marry a rooster, stay with the rooster.”

Mother is a smart woman and better educated than many of her fellow workers but she never got anywhere professionally. For nearly 30 years, she did one type of job – acid-pickling, one of the lowest jobs at the factory. It involved lifting machine parts into a tank filled with poisonous chemicals. A man’s job, really. In Mao’s era, his idea of gender equality was to deny the physical differences between men and women. The model women were the ‘iron maidens of Dazhai”. Dazhai was China’s agricultural model. These women dressed like men and could carry as much night soil as men folks.

Almost all urban women from my mother’s generation had full-time jobs. After the birth of her children, my mother returned to work after three months of maternity leave. We were brought up by our grandma.

I grew up in the residential compound that belonged to the factory my mother worked for all her life. All my neighbours were workers and all my friends were the children of factory workers. Becoming a worker was my most likely fate. But I had grand plans: I wanted to go to university and then become a writer and a journalist.

When I was 16, however, my mother dragged me out of the school and put me to work at the same factory. The reason was simple: we were poor. My assigned job was to test pressure gauges, simple and repetitive. A mini Communist empire, not only did the factory provide the workers with accommodation, dining halls and hospitals, it also controlled all aspects of our lives, including our hairstyle, our outfits or even our love life – dating wasn’t allowed within three years of entering the factory.

As an escape route, I decided to teach myself English, in the hope of obtaining a job as an interpreter with one of the foreign companies that were slowly setting up shops in Nanjing.

Looking back, learning English effectively changed my life as it has broadened my horizons. What I learnt wasn’t just the ABCs but the whole cultural package. It also gave me my own ‘rice bowl’ – English has become my working language.

Of course, it has been a long journey from the factory floor to this stage. Having worked at the factory for ten years, I left China for England. Once over there, a childhood dream stirred. I studied journalism. After I returned to China three years later, I started my career by helping western journalists as their assistant before becoming a journalist of my own right. Some of my feature stories were noticed by a commissioning editor from Oxford University Press, I was commissioned, together with my ex-husband, to write a history book on contemporary China.

Now, based in Beijing, I work as a writer, social commentator and public speaker. I feel extremely lucky. Along the way, I met people who have gone out of their way to help me. And I was born in the right time – Deng Xiaoping opened China’s door and introduced the economic reforms. Otherwise, I couldn’t possibly have achieved what I’ve achieved.

I was just singing the praise of Deng’s reforms. They have brought along plenty of opportunities to both men and women but also caused setbacks in terms of gender equality.

The income gap between men and women has been widening in the past three decades. Prostitution has made a spectacular return and the rich and powerful men once again boast to have ernai – the modern version of concubines. Women workers are always among the first to be laid off in the ailing state-owned enterprises. And female graduates have a much harder time in finding employment.

The government has retreated some of its responsibilities to the market. Yet the market doesn’t always treat women kindly.

China lags behind the world in terms of female political participation, especially in the grassroots and top governmental level. These days, the head of the village is brought about through direct election. Currently about 2% of the village heads are women. Some still hold the belief that decent women shouldn’t take an interest in public affairs and women are bad decision makers. We have a saying: women have long hair but short wisdom.

Unlike in the political field, Chinese women are faring better in the business. Half of the world’s self-made richest women come from the mainland China. Business is the area where women can fully explore their potentials.

Despite all the problems, I feel hopeful about women’s future in China, because Chinese women have started to take the matter into their own hands and are putting up a fight. They’ve set up NGOs, dealing with the issue of domestic violence, providing legal aid to women and helping sex workers. In recent years, I’ve noticed increased activism. Women have bravely gone to the street, to protest against domestic violence, against discrimination in employment and against lack of female toilets. Early this year, I marched for a week in central China with a young feminist friend. She walked all the way from Beijing to Guangzhou, in protest against child sex abuse.

There’s still a long way to go before women can truly hold up half of the sky. The good thing is that we are not sitting here, waiting for the miracle to happen. We are taking action.

On this positive note, I shall end my speech. Thank you for your attention.