We at China Speakers Agency are thrilled to announce that Professor Peter Diamond, 2010 Nobel Prize Winner in Economic Sciences, will be in Asia in early April, available for speaking engagements. 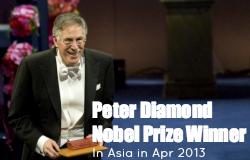 Peter Diamond was awarded the Nobel for his seminal work on search theory, the theory of the frictions and incentives involved in the process of matching. He is an Institute Professor at the Massachusetts Institute of Technology, known for his analysis of U.S. Social Security policy and his work as an advisor to the Advisory Council on Social Security in the late 1980s and 1990s. It was announced at the end of 2010 that President Barack Obama was to renominate Peter to the U.S. Federal Reserve’s Board of Governors.

Peter Diamond earned a bachelor’s degree summa cum laude in mathematics from Yale University and received a Ph.D. at the Massachusetts Institute of Technology. After beginning his teaching career at the University of California, Berkeley, Diamond returned to the MIT faculty in 1966 and has remained at the Institute ever since. He was promoted to full professor in 1970, and was named Institute Professor — the highest honor awarded by MIT’s faculty and administration — in 1997. Among many other avenues of research he has pursued in his career, he helped develop studies from the late 1970s onward that examined the ways markets function over a period of time. In 2003, he served as president of the American Economic Association.

Widely considered a world expert on labour analysis and an incredibly distinguished economist, Peter Diamond has embraced the role of public citizen, conducting highly influential research over five decades on a remarkably diverse range of subjects. In addition to his presentations on market analysis, he offers tailored talks on topics such as public finance and taxation, Social Security, labor markets and behaviour economics. His invaluable presentations make him a highly sought-after speaker at prestigious events all over the globe.

An expert on pensions and taxation with an honest, transparent, and comprehensive approach, Peter Diamond expertly helps audiences understand the ways in which unemployment, job vacancies, and wages are affected by regulation and economic policy, bringing some welcome realism and decency to current issues.

Contact us today at China Speakers Agency to take advantage of Prof Diamond’s Asia tour to engage him for your next event!