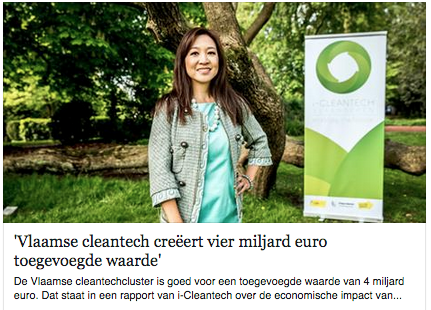 The Flemish cleantech cluster is good for an added value of 4 billion euros. This is contained in a report of i-Cleantech about the economic impact of cleantech.

The cluster around cleantech, a collective name for all technologies that claim to contribute to a cleaner environment, had, according to the latest figures of 2013 in Flanders and Brussels, an added value of 4 billion euros, an increase of 19 percent compared to five years earlier.

In total, the cluster allows 30,000 people to work, 7 percent more than in 2008. 90 percent of the cleantech industries employ less of 250 employees. Five percent of the companies are start-ups.

According to a report on the economic impact of cleantech in Flanders i-Cleantech yesterday suggested at the conference Cleantech Connected in Ghent. Main speaker Peggy Liu pointed out that China is investing billions of dollars in “viable technologies.

“By 2020 the country will get 15 percent of its energy from renewable sources by 2050 the dreams of 60 percent. And politicians get promotion only if they meet the targets. The secret of China is that it thinks in the long term, and it now wants to make sacrifices. China is a chief solution provider rather than a chief polluter. China is changing from the factory of the world to the clean tech laboratory of the world, “said the Sino-US sustainability expert. Belgian companies according to Liu opportunities in China by providing training, improve efficiency and processes to integrate different technologies.

Cleantech can not be put under one heading, but is woven in different sectors. The cluster contains, according to the report, which was prepared based on an analysis of annual reports and economic data, 950 companies. These are often involved in energy, but also with water, materials, and mobility. The share of cleantech at companies such as Beaulieu, DEME and Melotte, varies greatly. Thus, the report calculates that the clean tech projects Electrabel renewable energy make up four percent of the business.
Bart Vercoutere, CEO of i-Cleantech is pleased with the growth. “This creates an ecosystem around Flanders cleantech, with a good mix of mature and start-ups.” In order to improve mutual cooperation, yesterday Ceebio, an online database containing information about cleantech launched.

I-Cleantech is a network in 2012 after much opposition was founded by the Flemish government to stimulate innovation around cleantech in Flanders. The association has 72 members, including companies, governments and universities.