Most thrilled China Business Speaker, Rob Koepp , is going to publish, this summer, his new book “Betting on China”, which provides a timely and thought-provoking new way to see the interplay between the world’s two largest economies in the realm of the public exchange of Chinese equities on U.S. stock markets. 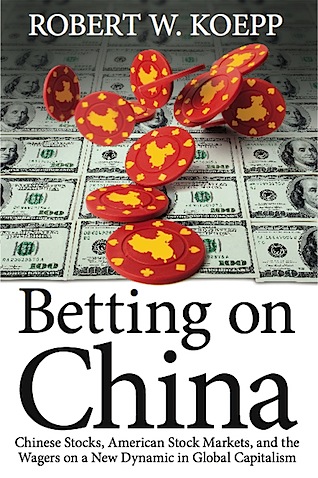 Rob Koepp is an American writer, consultant, and business executive with an eclectic background in finance, economics, technology, and the liberal arts. Dividing his time between the United States, Europe, and Asia throughout his education and career, Rob began full-time work after college as an itinerant researcher on a Watson Fellowship where he studied the evolution of Chinese-based calligraphies in countries throughout East Asia.

Fluent in Chinese and Japanese (and sometimes known to be in possession of a passing command of English), Rob began regularly working in mainland China as a World Bank-sponsored researcher advising the Chinese government on technology-based regional development. He stayed on in the PRC to serve as the managing director at a Sino-foreign joint venture of the CITIC Group, China’s largest financial conglomerate, and later as an advisor to foreign-based funds and corporations on their investment strategies in China. A graduate of Pomona College and Cambridge University, he currently resides in Beijing, where he works in financial and communications consulting.

Rob is passionate about spreading the first-hand knowledge he’s learned navigating and investigating the dynamics of the global economy, and he’s happy to share his insights through speaking engagements arranged by contacting [email protected].