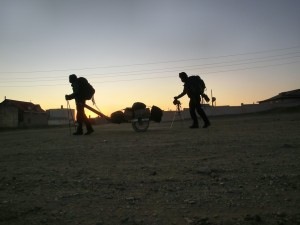 On November 14th Unconventional traveler and adventurer Rob Liwall kicked off his newest feat titled “Walking Home From Mongolia.” Previous Rob completed the incredibly ambitious “Cycling Home From Siberia” in which he rode his bicycle from the far eastern edge of Siberia back to his home in London. After cycling for 3 years across varied environments including Siberia, Papua New Guinea and Afghanistan learned firsthand that ordinary individuals could complete extraordinary expeditions. Now Rob has just started walking the 5,000km trek from Mongolia to his new home in Hong Kong.

Walking Home From Mongolia presents Rob with the threats of extremely cold temperatures and large snowfalls, the daily strain of carrying a heavy pack on his back while hoping his back and knees and feet survive the toll, and the very real possibility the Yellow River will be too frozen to kayak down as he presently plans to do. As if environmental unpredictability wasn’t enough, Rob will also need to hope that he won’t get endlessly caught up in local bureaucracy and politics in his effort to simply return home.

If you’re interested in booking Rob for a speaking engagement after he returns home, giving him the opportunity to share his hard-won insights with you and your organization, than you simply need to send a quick inquiry to [email protected].