Rod Beckstrom, former President and CEO of ICANN, the founding Director of the U.S. National Cybersecurity Center, will be speaking at the World Internet Conference in Wuzhen at the end of October. Contact us to engage him to speak at your upcoming event during his stay in China! 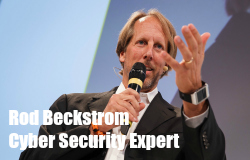 Rod Beckstrom is a well-known cybersecurity authority, Internet leader and expert on organizational leadership. He is the former President and CEO of ICANN, the founding Director of the U.S. National Cybersecurity Center and co-author of the best-selling book The Starfish and the Spider: The Unstoppable Power of Leaderless Organizations. He is a frequent international media commentator and public speaker.

Rod currently serves as an advisor to multinational companies, governments and international institutions, including serving as Chief Security Advisor to Samsung SSIC. He is Chairman of the Global Council on the Future of the Internet at the Switzerland-based World Economic Forum and is an Honorary Professor of International Law at China’s Beijing Normal University.

As founding Director of the U.S. National Cybersecurity Center, Rod was the Federal Government’s top cybersecurity coordinator, helping to integrate activities across key departments and agencies to combat the increasingly sophisticated threat to America’s interests at home and around the world.

Contact us at China Speakers Agency to engage Rod Beckstrom for your next event!