Dr Andy Xie wrote an article for South China Morning Post about Hong Kong’s economy. Andy considers that Hong Kong must restructure its property market to help ordinary people – rather than milking them for the benefit of the business elite, if stability is to return. 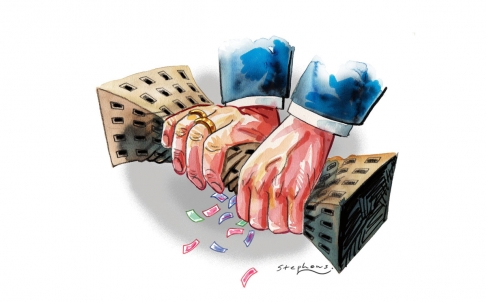 What stands in the way is Hong Kong’s ruling elite, a leftover from the colonial era, hanging onto the old model no matter what. Since they don’t have other sources of competitiveness, changing would mean the end to their privileged status. This is why meaningful change won’t happen through consultation among the elite. Some force has to impose the change. If Beijing wants stability in Hong Kong, it must focus on property, which means ditching its business friends.

In addition to artificially controlled land supply, interest rates play a role in the price cycle. But this confuses the debate. The interest rate cycle introduces volatility. So, if the US Federal Reserve raises rates to 3 per cent within three years, Hong Kong’s property prices may fall by 50 per cent over that time.

Yet housing still wouldn’t be affordable. When the price begins to fall suddenly, the debate will surely shift, and political support for limiting supply will return. Hong Kong could repeat the cycle.

Ruling Hong Kong requires a long-term vision, not the zig-zagging we’ve seen since the handover. During the Asian financial crisis, Hong Kong abandoned its expanded, but still modest, public housing programme, laying the seeds for today’s instability. Policy responses now should focus not only on short-term issues.