Zhang LiJia , our beloved speaker from Beijing and author of best-seller “Socialism is Great”, has recently published an article in the Guardian on the Chinese’s obsession on “weird” food, titled ‘Dog meat at a Chinese restaurant in Yorkshire’ – why do such myths spread? 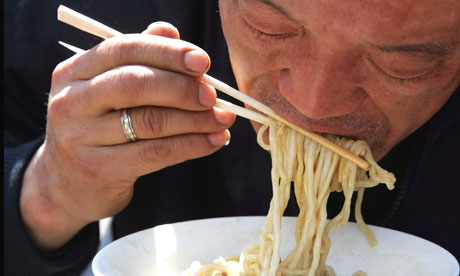 ‘Chinese cuisine is very much a famine cuisine – historically, Chinese people have had to make use every bit of available resources.’ Photograph: Greg Baker/AP

I was not sure if I should laugh or cry when I heard the news that an urban myth about a woman choking on a dog’s identification chip at a high-end Chinese restaurant in Yorkshire had led to an exodus of diners. Bizarre as the story sounds, it didn’t surprise me. When I lived in Britain, I met people who refused to go to Chinese restaurants because they believed – they were utterly convinced in fact – that such places sold dog meat (and their neighbours’ pets at that!). Racism takes all forms, and in the case of the Chinese, it often takes the form of disgust with the Chinese food.

Just last week, I saw another example of that when I watched the DVD of the first episode of the hugely popular travel documentary An Idiot Abroad, in which Karl Pilkington (the Idiot) is sent abroad to visit the New Seven Wonders of the World. The first episode is set in China. I did make me laugh – it is funny. But the sour smell of colonialism taints the programme. It dwells so much on the weird eating habits of the Chinese people: cicadas and worms at a Beijing night market, a long shot of a young woman stuffing scorpions into her mouth, Karl commenting on a man eating “foetus egg” and a family by the Great Wall killing and feeding him toads! (Bullfrogs actually.)

China has a fabulous and sophisticated cuisine, but westerners always focus on the tiny percentage of what we eat that is weird. And the very good reasons that the weird stuff made it into Chinese kitchens is never mentioned: Chinese cuisine is very much a famine cuisine; historically, Chinese people have had to make use every bit of available resources.

Want to know more in-depth information about today’s Beijing and China, contact us at +852 3489 9246 or [email protected]cy.com to engage Zhang LiJia for your next event.