Andy Xie, renowned Chinese economist says that Australia could be the next Spain if its property bubbl bursts.  He things high foreign net debt and Australia’s dependence on China could tip the country into recession...

Here is Andy’s interview at CNBC: 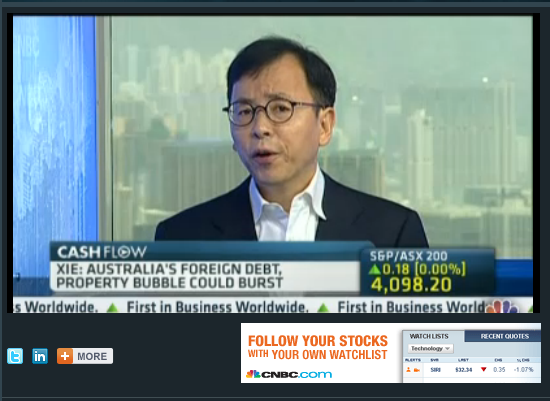 Andy Xie 謝國忠, renowned economist based in Shanghai, and former Morgan Stanley Chief Asia-Pacific Economist, is famous for his contrarian and provocative views.

Xie is one of the few economists who accurately predicted economic bubbles including the 1997 Asian Financial Crisis, dot-com bubble (1999) and Subprime mortgage crisis (2008).

Xie graduated from Massachusetts Institute of Technology with a M.S. in Civil Engineering. He then obtained a PhD in Economics from Massachusetts Institute of Technology in 1990 and went on to become an economist for IMF, specializing in South-east Asian economies. He joined Morgan Stanley in 1997 as a Managing Director, and is noted for his provocative views on the Chinese economy. He eventually departed after reaction to his comments about the level of corruption in Singaporean business.

Since then Andy’s comments on the sustainability of the Chinese economy and its stock market have attracted criticism from the authorities, while the accuracy of his predictions gained great following.