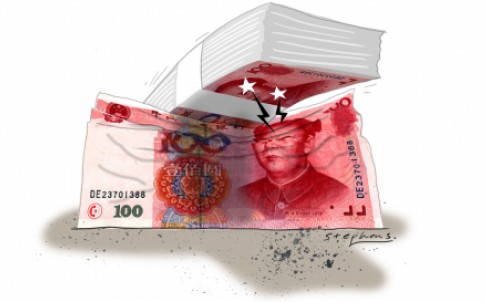 …the stock market bubble is likely to burst this year. What then?

China’s economic tasks are: one, to deal with the consequences of the property bubble; and, two, to reach a sustainable balance between investment and consumption. The numerous micro problems that many analysts like to point out stem from these two macro challenges. When the macros are healthy, most micro problems will just go away. It is sad to see that the government loves to talk about micro problems and takes no action to deal with their macro origins.

China still has potential. The current per capita income, merely a fifth of the level of advanced economies’ and 20 per cent below the global average, is far less than Chinese workers can achieve. A good economic system could quickly bring China’s per capita income to half the OECD level. To get there, China must increase household consumption from one third to 60 per cent of GDP and reduce fixed asset investment from half to 30 per cent of GDP.

Playing with money, such as through quantitative easing, merely postpones the day of reckoning. Without structural reforms to boost investors’ willingness to pay for the future, the hidden non-performing loans will bring down the financial system. Being clever is just not enough. China must accept the pain that comes with real reforms.