Dr Geoff Raby, former Australian Ambassador to China, was recently interviewed at the “Bloomberg Daybreak: Australia” with Haidi Stroud-Watts and Shery Ahn. He discussed the the strained China-Australia relationship and more. 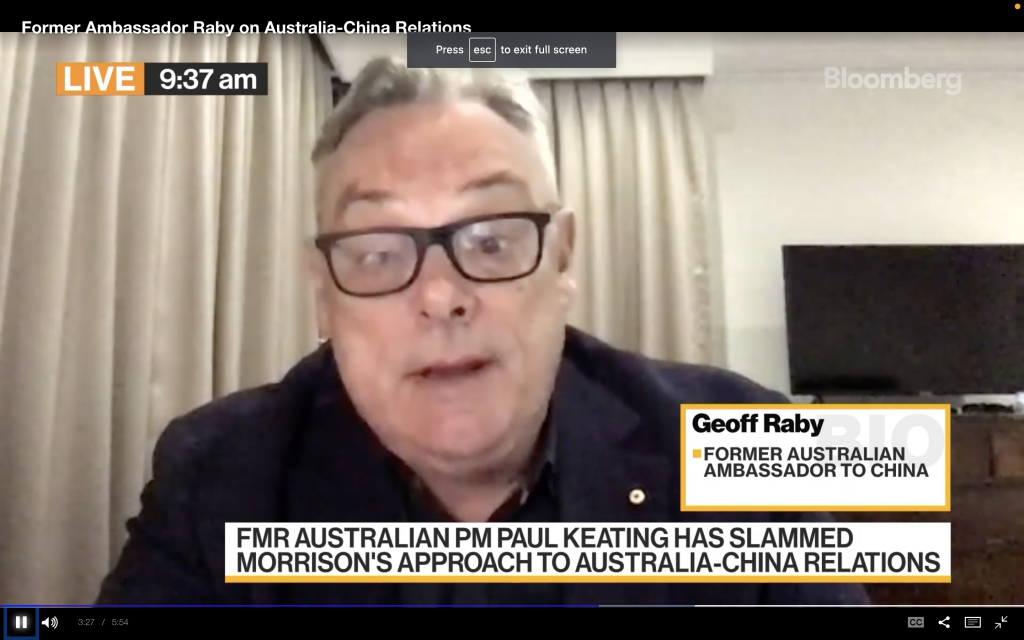 Dr Geoff Raby 芮捷锐博士 was Australia’s Ambassador to China from 2007 to 2011. After 27 years in the public service, he completed his Ambassadorial term and resigned to establish Geoff Raby and Associates in 2011.

Dr. Raby was the Deputy Secretary in the Department of Foreign Affairs and Trade (DFAT) from 2002 to 2006. He has held a number of senior positions in DFAT, including First Assistant Secretary, International Organisations and Legal Division (2001-2002), Ambassador and Permanent Representative to the World Trade Organisation, Geneva (1998-2001), First Assistant Secretary, Trade Negotiations Division (1995-1998), and APEC Ambassador (2002-2004). He was head of the Trade Policy Issues Division in the OECD in Paris during 1993-95.

In recognition of his contributions to advancing relations between Australia and China, Dr. Raby was made Friendship Ambassador to Shandong Province and an Honorary Citizen of Chengdu City.

Dr. Raby is a Member of the Australian Institute of Company Directors and the Asia Society. He holds an Honours Degree in Economics, a Masters in Economics and a PhD from La Trobe University. In 2015, Dr. Raby was part of the consultative committee for the draft of Australia’s National Strategy for International Education.

Contact us to engage Dr Geoff Raby to speak at your next event.