China banking expert and speaker, Joe Zhang, opined that “If China is really worried about shadow banking, there is a neat solution: turn off the credit tap. Beijing must deal with shadow banking head-on rather than diverting energy to tangential matters such as regulation and deposit insurance.” Read more about it in his SCMP article… 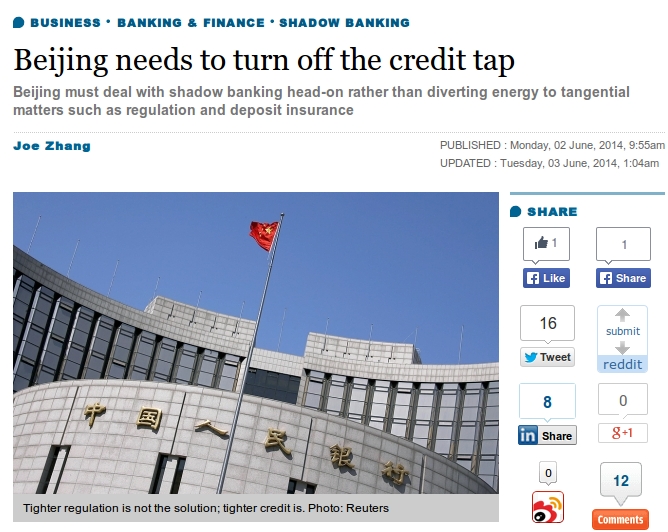 China’s shadow banking is opaque, huge and fast-growing. In the past year, it has managed to cause two interbank crises, a few small-scale bank runs and several high-profile defaults and near-defaults of bonds.

This has all proven to be enough fun for the government, which in recent weeks has signalled a two-pronged response: tighten regulation and introduce a deposit insurance scheme. Unfortunately, both plans are misguided, in my view.

Now a very un-Chinese approach is needed urgently. The banks must learn to downsize their loan portfolios – or at least slow the growth of them – to meet their capital ratios.

None of the troubles in the mainland’s banking industry today is due to credit tightening, which is not in the Chinese government’s vocabulary. On the contrary, it is all due to excessive credit expansion.

The government must come out of denial and deal with the issue head-on, rather than diverting energy to tangential matters such as regulation, deposit insurance and preferred shares.