Lijia Zhang, China-based journalist and cultural commentator, shared her observations on China Today on China’s “left-behind children” and on South China Morning Post on the identity of the mixed-race children. 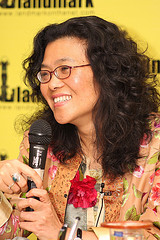 Ever since China’s reform and opening up, some 260 million people have migrated from villages to cities in search of a better life. One of the biggest negative effects of the “greatest migration in human history” has been, in my view, the “left-behind children” phenomenon. There are estimated to be more than 60 million of them.

China’s hukou or family registry system, introduced by Mao Zedong in the 1950s as a way to control the flow of population, divides China into a rural and urban population, with the latter enjoying much better access to education, health care and other social services. At first, migrant children were not even allowed to enter local schools. Slowly, restrictions were relaxed, but many obstacles remain and migrant schools exist precariously in a grey area.

There are no doubt many reasons why these mixed blood children more readily identify themselves with Western culture. China may be the second-largest economy in the world but it still lags behind the West in many aspects, and the government may not be the most popular in the world. Western pop culture, for one thing, is extremely influential among the youngsters.

Will China’s fast-growing economy and rising position in the world change the equation? It may take a long time. These children may change their views as they grow older.