Renowned futurist and scientist Michio Kaku shared his insights on the upcoming life changing breakthroughs in an interview on Reddit. Business Insider wrote an article about the interview. 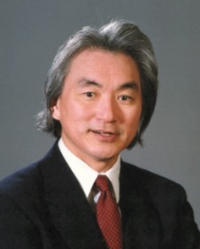 “Time travel and teleportation will have to wait. It may take centuries to master these technology. But within the coming decades, we will understand dark matter, perhaps test string theory, find planets which can harbor life, and maybe have Brain 2.0, i.e. our consciousness on a disk which will survive even after we die.”

“I think, in the coming years, we will have a brain pacemaker that can stimulate the memory of people with Alzheimer’s disease. They will be able to upload simple memories of who they are and where they live. Beyond that, we will be able to use electronics to upload vacations we never had, perhaps. And the internet itself will be a brain-net of emotions and memories.”

“The 20 century was the century of physics, with computers, lasers, TV, radio, GPS, the internet, etc. Physics, in turn, has made possible that can probe biology. So I think the 21st century will be the century of physics and biology, esp. biology that can be explored via physics. So the future belongs to nanotech, biotech, AI, and quantum physics.”

Dr. Michio Kaku is a theoretical physicist, best-selling author and scientist of world renown. He is the Henry Semat Professor of Theoretical Physics at the Graduate Centre of the City University of New York. His goal is to complete Einstein’s dream of a “theory of everything”, a single equation that unifies the 4 fundamental forces of the universe. From interviews to documentaries, Dr. Kaku has explained the most fascinating and complex ideas in science today. On television he has been featured on the PBS documentaries: Einstein Revealed, Stephen Hawking’s Universe, and Science Odyssey.

His technical books are required reading for scores of Ph.D. graduate students in major physics laboratories around the world. His weekly radio programme Explorations in Science focusses on topics such as frontiers in physics, black holes, time machines, hyperspace, the human genome project and genetic engineering.

Using the cutting edge research of today’s foremost scientists, Michio explores the science of tomorrow: computers, artificial intelligence, reshaping our genetic inheritance. He explains how science is opening entirely new avenues for society and organisations at large and provides valuable advice on how to prepare for change.

A mesmerising and humorous speaker, he conveys a contagious sense of the wonders of science at the most prestigious conferences world-wide.

Contact us today at info@chinaspeakersagency.com to engage Dr. Michio Kaku for your next event.