Miles Hilton-Barber, Blind Adventurer and International Motivational Speaker has had the privilege of speaking at over 800 corporate events in 69 countries to date.

He has, since the age of 50, set numerous world records whilst undertaking extreme endurance events across all seven continents of our world, including;

He comes to remind us that we too can live our dreams, because “the only limits in our lives are those we accept ourselves”.

He is an exceptional storyteller and inspiring corporate motivational speaker whose messages come wrapped in a package of humour and profound personal insight.

Whether Miles is giving a keynote corporate presentation or an after dinner speech, his humour, timing and use of material is exceptional, telling stories from his own rich experiences as a blind adventurer, covering such life-lesson themes as;

Companies and organisations where he has spoken include

“I can’t even imagine the difficulties of travelling in Polar Regions without being able to see things. My admiration for Miles is enormous”
Sir Ranulph Fiennes

“I have nothing but awesome admiration for his bravery…”
Michael Palin

“Miles was sensational as the opening speaker at the Million Dollar Round Table conference in California and his presentation skills to some 9,000 delegates from 80 countries was captivating. BRAVO!”
Guy Baker , BTA Group

“What can I say! I was reduced to tears and made to feel very humble by this gentleman. I have attended a lot of functions with guest speakers not one has taken a group of people on a rollercoaster of emotions… A truly inspirational man!”
Peter O’Neill , Partner, Ernst & Young LLP

“We have worked with Miles on a number of events – the team find his vision, ambition and desire to push out the barriers, truly inspirational – it is rare in feedback for any speaker to score so highly and to have such an impact on any event.“
Steve Pateman, Director, Corporate Banking, Royal Bank of Scotland

“Miles is not only a global adventurer, he is also an entertaining presenter whose inspirational messages register with any culture. His witty stories, images and achievements captivated our group of Japanese employees, staff and customers, and they went away with renewed energy, motivation, and courage to tackle our business challenges as an effective team.”
Richard Thornley , Regional Director-Japan, Rolls-Royce International

“I have never seen anyone get a standing ovation at a European venture capital conference before. Miles was outstanding at our Stockholm conference…”
Patrick Sheehan, Chairman, EVCA Venture Capital Platform

“Miles, thank you for both of your incredibly moving and inspiring presentations to GSK in Lisbon last year and yesterday at GSK House.
Please don’t underestimate what a profound and inspirational impact you have made…”
Jane Dixon, OTC Consumer & Market Insight, GlaxoSmithKline 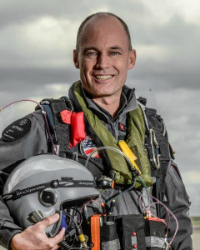 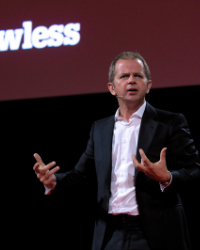 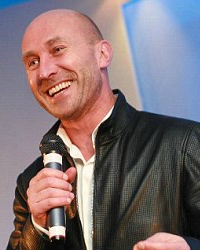 The Power to Survive